Birds are one of the most beautiful creations of nature.

What a wonderful experience to wake up in the morning and hear the sounds of the sweet chirping of the birds.

It’s a pure delight to watch birds flying in the sky.

It’s always much fun to look and appreciate their many shapes and colors.

If you love birds, then you will certainly enjoy this post.

Here, we have featured different types of birds.

In fact, there are over 9000 species of birds in the world.

They are natural wonders of flight, color, song, and display.

Learning about them is surely an exciting adventure.

Here, we have covered a wide array of avian species from pet birds to exotic birds.

It’s a short but insightful guide to a common type of birds.

We have put together a list of different types of birds with pictures and information.

Here, you will get pictures of different birds together with their names. You will also get useful information about these birds such as where they are found, their background, their habitat, behaviors and even bird care.

This bird guide will aid you in bird identification as well as choosing a pet.

Birds are warm-blooded and featured creatures.

They can fly due to their wings and can lay eggs.

In fact, Birds are nothing short of a marvel.

Birds fall into the vertebrate category of living beings.

They are characterized by the beak, feathers, lay hard-shelled eggs, having metabolic rate and a four-chambered heart. They are lightweight but have a strong skeleton.

Here, we have endeavored to list out common types of birds.

Moreover, these are different types of birds.

You will find birds name with pictures in English.

So, let’s move on this exciting journey and discover different types of birds.

Parrots are mostly found in sub-tropical and tropical regions. Their scientific name is Psittaciformes. In fact, there are about 372 species of parrot in existence.

Parrots live in groups called flocks, and each flock has about 20 to 30 birds. Their size ranges from 3.5 to 40 inches. Their mass can be anywhere from 2.25 to 56 ounces.

Parrots are omnivores and eat nuts, fruits, insects, etc. The clutches of parrot contain only two eggs. Their incubation period is about 18 to 30 days. Chicks become fully mature in one to four years depending on species.

The lifespan of parrots varies from 50 to 95 years. 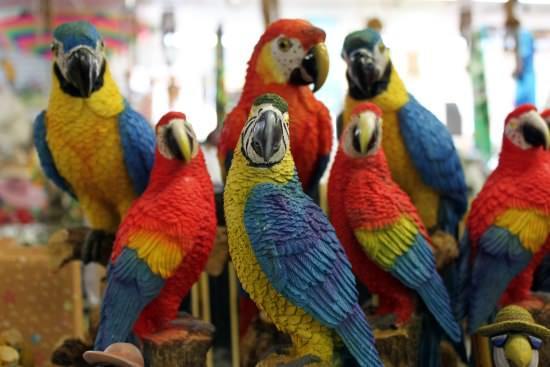 Kingfishers belong to the family of Alcedinidae.

In fact, Kingfishers contain three families such as Alcedinidae, Cerylidae, and Halcyonidae. These families contain tree, river and water kingfishers.

There are as much as 90 species of kingfishers.

Kingfishers have a large head, sharp, long and pointed bills.

They have short legs and stubby tails.

Kingfishers are usually found in forests in the tropical regions.

They are carnivores and generally feed on fish and a wide range of prey.

Kingfishers love to live near rivers for eating fish.

They build nests in cavities, a tunnel dug into artificial banks in the ground.

Incubation is done by both sexes.

Offspring live with their parents until 3 to 4 months. 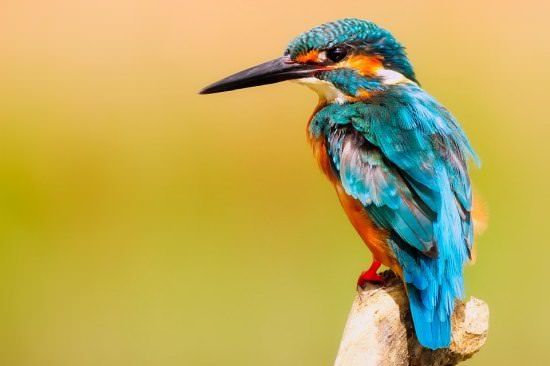 The Toucans belong to the Ramphastidae family.

It is closely related to American barbets.

Toucans name is derived from Portuguese.

Their bodies are short, and its size is comparable to crow.

Toucans have a rounded tail.

It has small wings and neck is thick and short.

Its tongue is about 15cm and is narrow and grey in color.

It has sensitivity organ of taste.

Toucans are mostly found in subtropical and tropical regions such as Central America, South America, Southern Mexico, and in the northern portion of Caribbean region.

They are arboreal and lay white eggs from 2 to 21 in their nests.

Toucans are omnivores, and they eat fruits, insects, and small lizards. They feed their chicks with animal food. Toucans are usually found in pairs. 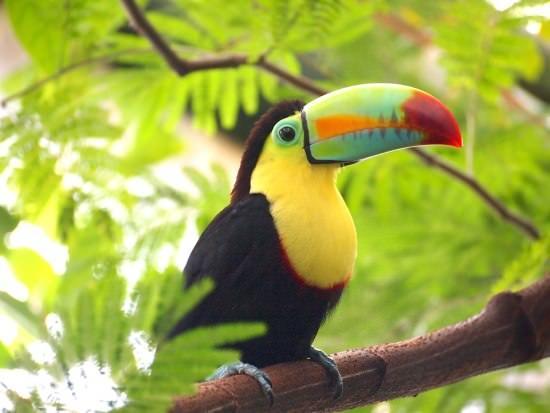 Swift belong to the Apodidae family of highly aerial birds.

Swifts are amongst the fastest fliers and fly about 169 km/hr.

They have large wingtip bones.

Swifts have the flexibility to change their angle between wingtip bones and forelimbs for altering the shape and area by maximizing their maneuverability and efficiency. They can even rotate their wings from the base.

Swifts are usually found on oceanic islands in nearly all the continents.

Their nests are glued to a vertical surface with saliva.

Eggs hatch in 19 to 23 days and leave within six to eight weeks. They are incubated by both parents. 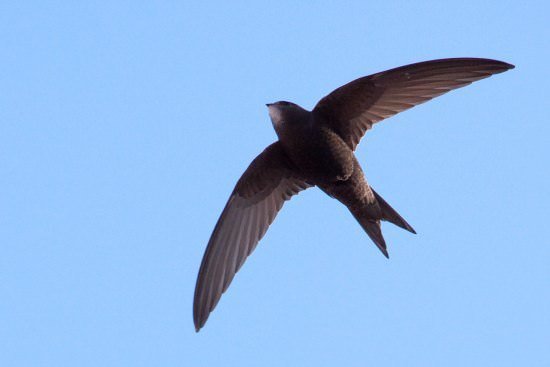 Hummingbird belongs to the family of Trochilidae.

Its scientific name is also Trochilidae.

They are the smallest birds and range from 7.5cm to 13cm.

They are called as hummingbird because a humming sound is created when they flap their wings.

Hummingbirds can fly in all directions. 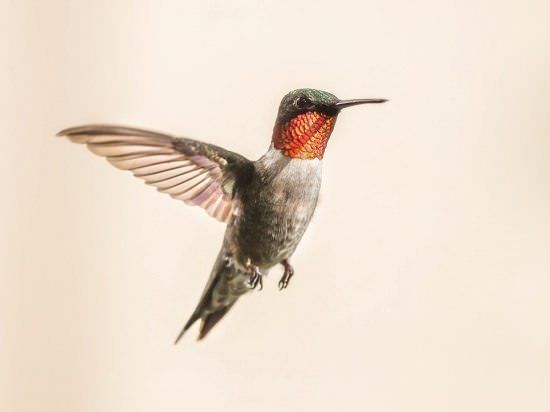 Hornbills belong to the Bucerotidae family. They are usually found in subtropical regions of Asia, Africa, and Melanesia. Hornbills weigh up to 6.2 kg, and their body length ranges from 1 foot to 3 feet 11 inches.

There are about 55 species of Hornbills. They are omnivores and like to eat fruits and insects. The clutch contains six to eight white eggs.

During the period of nesting, the male brings about 24000 fruits for female. One unique feature of hornbills is that they have eyelashes.

Doves & Pigeons belong to the Columbidae family. In fact, there are nearly 310 species of doves available. They are considered symbols of love. They weigh about 900g to 2.1kg.

The body length of the adult male is about 55cm, that of the western crown pigeon is about 70cm, and the dwarf measures about 13cm to 15cm in length.

Clutch size is only one. These birds feed on seeds or fruits. These are mostly found in tropical nature and woodlands. Incubation is carried out by both parents. Male birds which are single make a woo-hoo sound. 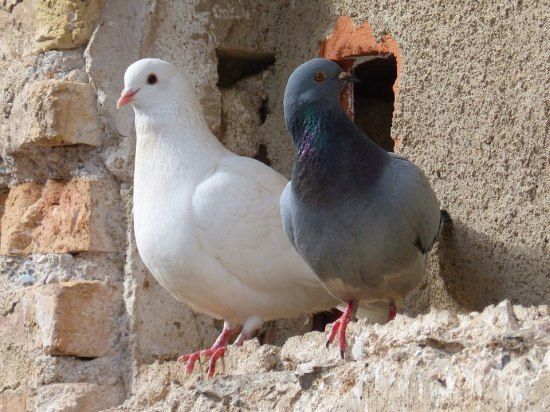 Bee-eater belongs to the Meropidae family. Their scientific name is also Meropidae. There are nearly 26 species of bee-eater at present. These are mostly found in Africa, Asia, Europe, New Guinea, and in some parts of Australia. Bee-eater preys on flying insects and bees, etc.

One unique habit of bee-eater is that it removes stinger of an insect before taking a meal. The clutch contains two to nine eggs which are white in color. They build nests by burrowing in the ground. Incubation is carried out by both parents. 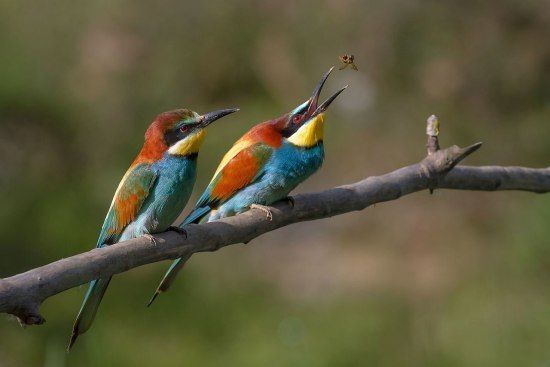 Spoonbill is a long-legged wading bird. It belongs to the Thresiornithidae family. Their scientific name is Plateinae. So far, six species of Spoonbills have been recognized.

They build nests in trees and reed beds. The clutch contains about three eggs which are smooth and white in color. Incubation is done by both parents. They prey on fishes and insects. Spoonbills nest in colonies and flocks. 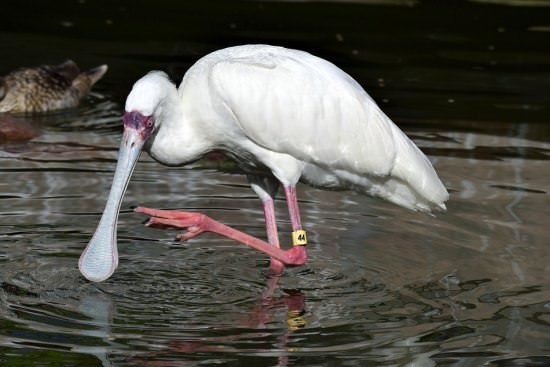 Woodpecker belongs to the Picidae family. Their scientific name is also Picidae. It is mostly found in New Zealand, Australia, New Guinea, Madagascar, and also in extreme Polar Regions.

There are nearly 200 species of Woodpecker at present. They are found in many colors such as black, yellow, white and red. Woodpeckers can peck 20 times per second.

They prey on insects and dead trees. Their nests contain two to five eggs. The incubation period of Woodpeckers is 11 to 14 days. 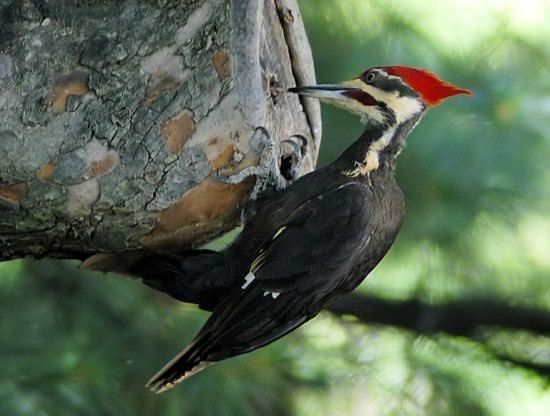 Goose Bird belongs to the Anatidae family, and their scientific name is Anserini. Goose Birds weigh from 3.2kg to 6.5kg.

The lifespan of Goose bird ranges from ten to twenty-four years. 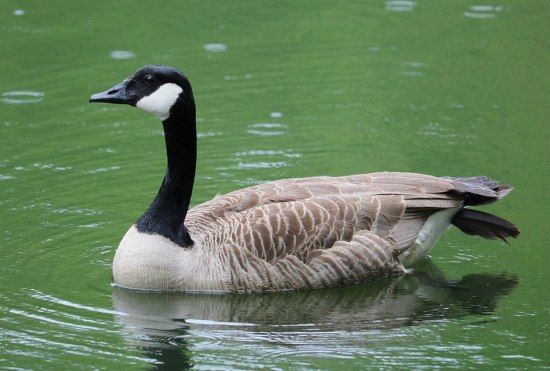 Penguins belong to the Sphenisciformes family.

Its scientific name is Spheniscidae.

In water, penguins can attain a maximum speed of 9 km/hr.

Their body mass is about 38kg.

Their height varies according to species. It is 33cm for the little penguin, 49cm for Galapagos penguin and 1.1m to 1.3m for Emperor penguin.

Penguins have a maximum lifespan of 20 years. 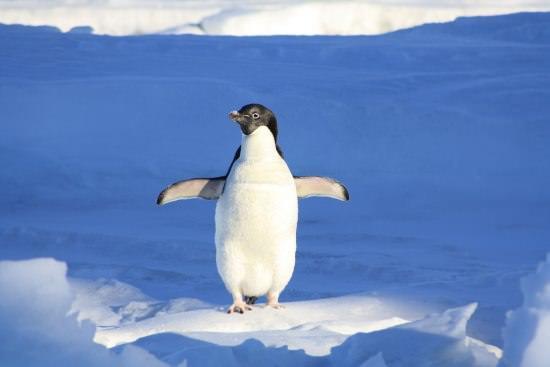 There are as much as eighty-three species found in this family.

Swallows breed across the world except for Antarctica.

Swallows are migratory birds and migrate to various places across the world.

The weight of an adult swallow is just about 10 to 60g.

Clutch size is four to five.

Incubation period gets shared between species. 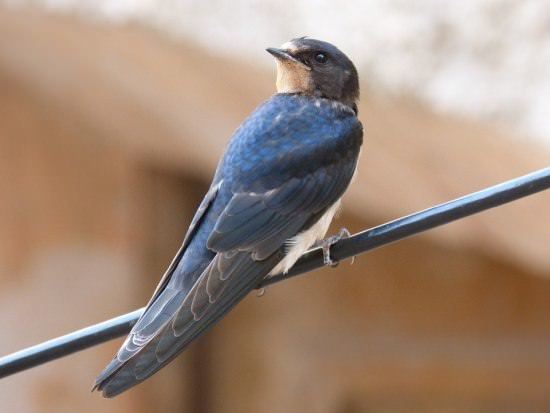 Gulls are often referred as Seagulls.

Its scientific name is Laridae.

The body mass of an adult gull is about 1.8kg.

The length of the body of great black gull adult is about 1.5m to 1.7m.

Clutch size varies depending on the gull species.

It is 1 for the swallow-tailed gull, 2-6 for the little gull, and 1-3 for great black gull adult.

Gulls mostly feed on marine and freshwater lakes fishes as well as invertebrates. They also drink sea and salt water.

There are as much as 54 species of cuckoo.

They are mostly found in Asia, Europe, Africa, and Australia.

Cuckoos usually inhabit areas such as meadows, fields, and marshes.

Sometimes, Cuckoos can also be found in alpine areas.

Male cuckoo sings for us.

They feed on insects and caterpillars.

The lifespan of a cuckoo is about six years. 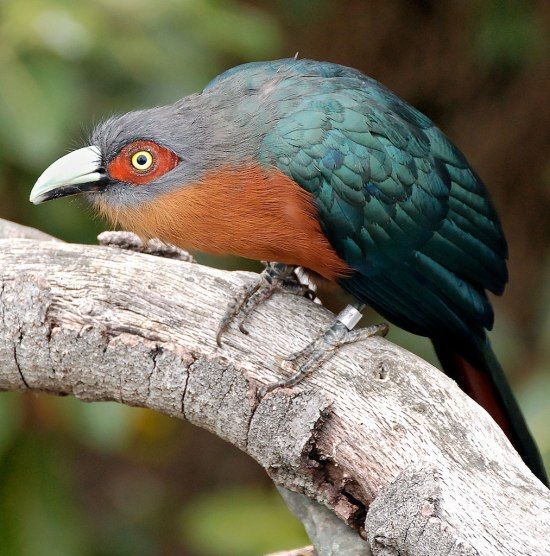 We hope that you would have liked this presentation on different types of birds. We would like to hear your opinion.